Human, fae or deity, Arawn is the shapechanger in the first of the episodes of the First Branch whose plotting sets off the cycles of the Mabinogi saga. Crowned King of the underworld of Annwfn, antagonist to Hafgan, a magician, and married to a beautiful nameless queen. Obscure etymology, see below. 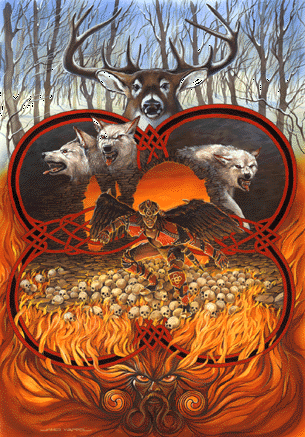 Arawn meets Pwyll in Glyn Cuch, who insults him by stealing his kill, a king stag. Pwyll offers compensation, and agrees to fight Hafgan in Arawn’s place.  Arawn shapechanges them both so they can swap places as rulers.
Part of the contract is Arawn’s gift of his beautiful queen, mysteriously never named, to live with Pwyll as his lover for a year. Pwyll chooses not to become the queen’s lover though he shares her bed, which impresses Arawn greatly.
Arawn instructs Pwyll to give the antagonist Hafgan only one blow or else Hafgan will rise again from the dead. Pwyll obeys, Hafgan is carried away, and Pwyll orders the two realms as one.
After this when the men return to their own lands,  Arawn continues a strong alliance with Pwyll, exchanging rich gifts.  Pwyll is thereafter called Pen Annwfn, Chief of Annwfn.

Arawn’s name has no clear etymology but may derive from proto-Celtic forms *ar-yo- (to plough) and *aratro- (plough) and *arawen- (grain, cereal) [From Celtnet] On this interpretation Arawn would mean a spirit, god, or ruler of agriculture. His opponent Hafgan’s name means Summer Whiteness (Haf – Summer, and Gwyn – White) so Arawn may be seen as the dark half of the year, when land is ploughed, and grain is sown into the ground to grow within it as roots.