Horse motifs are found especially in the story series of Rhiannon, her son Pryderi / Gwri, Teyrnon and his Lady of Gwent. This powerful horse theme does not continue after the Dyfed saga ends.  (First, Third, and opening of the Fourth Branch).  Horses are also key to Efnisien’s terrible redress of his insulted honour in the Second Branch. 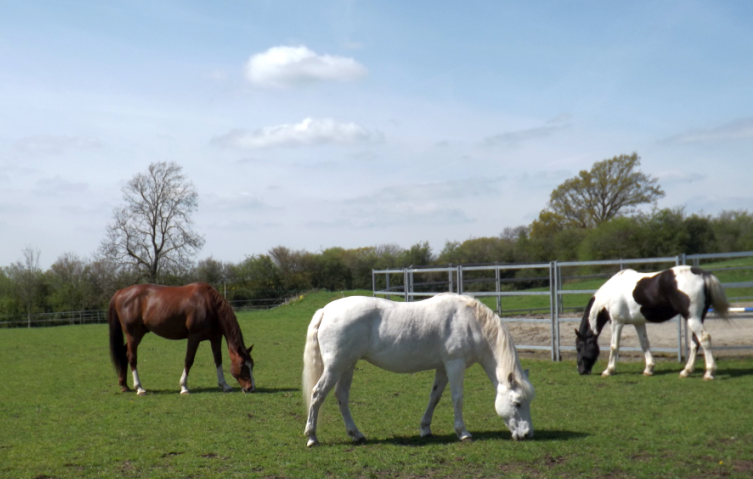 The pale horse in the foreground is Bramble, a small Welsh cob. Rhiannon’s pale horse would have been similar but much larger. (Photo by John Davies, May 2014)

The horse was at the centre of mediaeval life, similarly to cars in our society. Horses gave high status, higher physical positioning, speed, power and economic production. Horses are social animals and as such are companionable, loved and admired. They are central to most of the tales of the Mabinogi.

Giraldus Cambrensis, Gerald of Wales, writing in 1191, contemporary with the main Mabinogi period, refers to the outstanding stud farms of South Wales, whose stock benefited from Spanish strains imported by Robert of Belesne (sic), Earl of Shrewsbury. (Jenkins, 1997: 77)
“There are some excellent stud-farms. A superb race of blood-stock is now bred there, tracing its descent from the Spanish horses which Robert de Bellême, Earl of Shrewsbury, had gone to some pains to have imported long ago. The horses which are sent out from Powys are greatly prized: they are extremely handsome and nature reproduces in them the same majestic proportions and incomparable speed.”
(Giraldus, Chapter XII)
Since Robert de Bellême, Earl of Shrewsbury, is known to have claimed his deceased younger brother’s English estates in 1o98 the Spanish stud import was probably in the early 12thC. This sounds very like the impressive horse which Rhiannon rode (see below) and the larger range of Welsh cob still bred today.

There were well defined categories of horse stock. The charger, steed or destrier was bred for war, heavy and strong enough to bear an armed man. They were also bred to be aggressive, dangerous fighters. The palfrey was also fine bred, but calmer in temperament, for everyday use, including riding for pleasure, to visit for example, and the major occupation of upper classes: hunting. The courser was lean built for speed, used by messengers. Then there were workhorses for heavy labour tasks like haulage of wagons, and farming.

In the First Branch two nobles, Pwyll Prince of Dyfed, and Arawn King of Annwfn, meet in forest glade when hunting. Their status and pride is demonstrated by both being horsemen and hunters, and by their long argument about status. Note Pwyll is not explicitly stated here as on horseback, but as a lordly hunter it would have been very odd if he had not been mounted.
~ In the next tale of the First Branch, Rhiannon appears on a great and noble horse, which declares her high position. It is also shining pale, coloring associated with Annwfn enchantment. The horse is bound up with her paradoxical movement, which appears slow but no amount of speed by her followers can reach her. Whether this paradoxical movement is her hud, magic, alone; a power owned by the horse; or a synergy between the two; is not specified. Her calm demeanour mounted on a fine horse, together with her magical/ divine mystery,  evokes the ancient Gaulish goddess Epona, whose cult accompanied the crack horse auxiliaries of the Roman legions across the Roman Empire.
~ In the third tale of the First Branch Rhiannon’s lost baby is discovered far away by the door of the royal house of Gwent. Teyrnon is a horse lord, which fits Gerald of Wales’ reference to the outstanding horse breeders of the region. Teyrnon had been sitting vigil for his outstanding mare, because the mare had birthed before on May Eve but her foal then disappeared. She had now just birthed another fine foal when an intruder attempted to steal it. Teyrnon fought off the monster intruder, and discovered the baby left by his door. The Lady of Gwent, his wife, later suggested the May Eve colt be given to the boy, for he showed that he greatly loved horses by spending much of his time working with them.
Meanwhile his birth mother Rhiannon has to do penance because her maids framed her as an infanticide to conceal their lapse as guardians of the baby. Rhiannon agreed to do penance for seven years, to sit by the mounting block of Arberth castle and serve as a mount for arriving travelers She, like Bendigeidfran, is a giantess at times, capable of carrying grown men on her back as a horse does.

In the Second Branch it is the horrible mutilation of horses by the villain Efnisien, which disrupts the major alliance between Britain and Ireland. Efnisien signals his deep grievance about his status being ignored in the consultation on this marriage alliance. So appalling is this insult of mutilating horses that it takes massive compensation by the British king Bendigeidfran, to avert war with Ireland. The horse is thus demonstrated as a crucial part of the status of the upper class and their politics.

In the Third Branch Pryderi, the boy so loved horses is now a grown man, restored to Dyfed and become its ruler. A vengeful magician devastates the land by stripping it of all people and all domesticated animals; but Pryderi still has his horse and hunting hounds. He undergoes an enchanted sojourn trapped by magic; Rhiannon follows him to endure it with him. It transpires that during this imprisonment Rhiannon had to wear an asses’ collar. This is another link with her animal nature seen earlier in the First Branch; an ass is close to a horse as an animal trained for riding and haulage. However, like the penance work Rhiannon carried out at the mounting block of her castle, this asses’ collar is a humiliation because the ass is a low status animal in human economics.

In the Fourth Branch, Pryderi is still the ruler and war leader of Dyfed. He is beguiled by the magician Gwydion who tempts him to break his contract with Annwfn by offering him twelve richly caparisoned horses and hounds in exchange for his wondrous herd of pigs. The end result is Pryderi’s death when he accepts the shady deal Gwydion offers him, for the horses Pryderi cannot resist are just temporary illusions of magic. He dies in a duel of honour with Gwydion, which would have been fought on horseback, a fitting death for the boy who so loved horses, child of a queen whose nature was deeply equine.