My map of the world of the Mabinogi shows the Welsh and English names, and spans from Iwerdun (Ireland) to Llundain (London).

PIC IS BIGGER than shown here – rightclick and save! 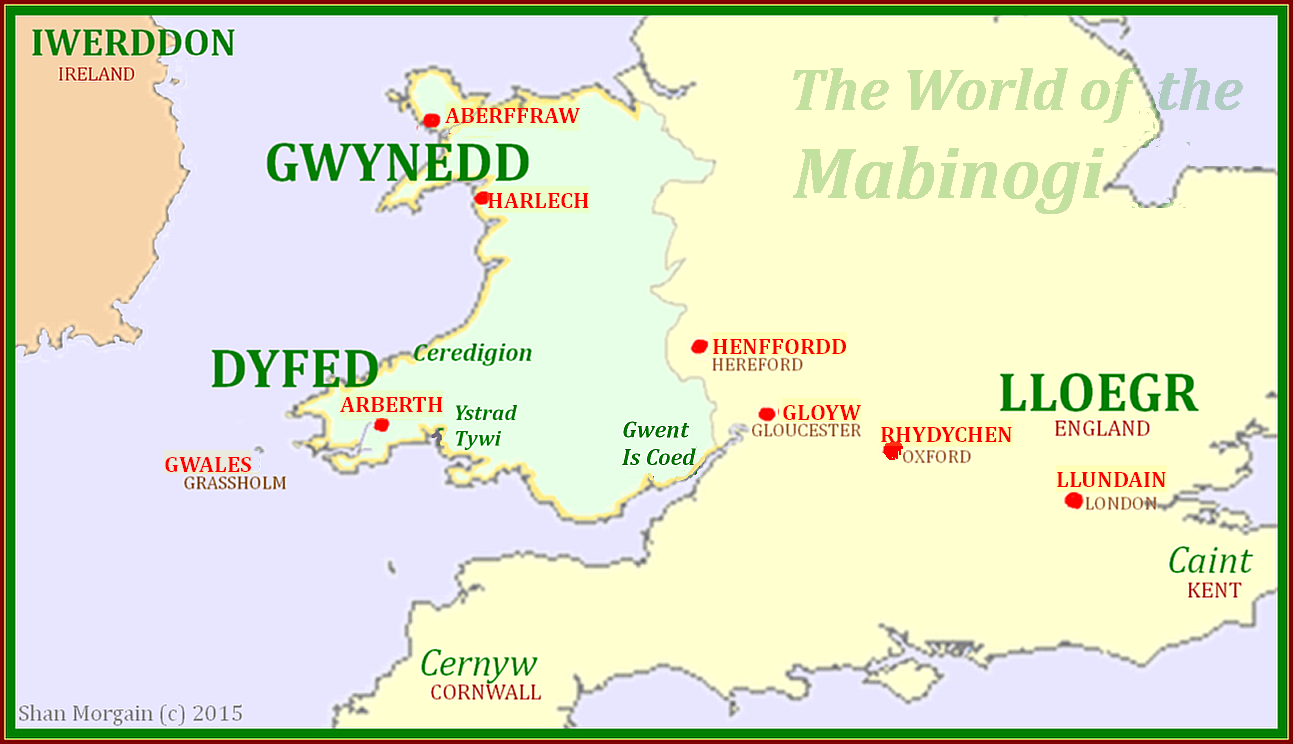 COPYRIGHT remains mine as Shan Morgain, but you are free to rightclick and download for personal use, or teaching, providing the map is unchanged. For publication, please contact me.
>My thanks to John Davies, the sailor, for help locating Gwales (Grassholm) island; and for patient help with the Welsh names from Christine James, my supervisor. Any mistakes are still my responsibility.

Notes about the places in the map.

The boundary between Wales and England is the modern one. In the mediaeval period this fluctuated a good deal, changing according to the fortunes of war and colonisation. The First Branch of the Mabinogi presents Gwent as definitely a Welsh lordship: it was by the later 11thC under English, then Norman invasion.The Third Branch of the Mabinogi locates Henfford (Hereford) on the English side.

The First Branch opens at Arberth in DYFED, shown here at modern Narberth. An alternative location is northerly, near Ceredigion. Here Pwyll sets off to hnt, and later meets Rhiannon. GWENT where Pryderi grows up, is about 100 miles away from Arberth, five days to a week’s travel. Pryderi marries Cigfa of Gloyw (Gloucester) in border country. He adds the territories of Seisyllwch to DYFED (made up of Ystrad Tywi and Ceredigion both frequently contested territories). Annwfn is an anomalous location, possibly outside physical geography, so not shown.
The Second Branch has a Brythonic/ British king holding court at Harlech with its great rock, in GWYNEDD; ruling all Ynys Pydain, Britain. Branwen’s wedding is held at Aberffraw. The British sail west to war in IWERDDON (Ireland). Pryderi, Manawydan and other war Survivors return, to sojourn in Harlech, then Gwales off the DYFED coast. Cernyw (Cornwall) is visible from Gwales’ enchanted hall. Finally the Survivors take Bendigeidfran’s Head to Llundein.
The Third Branch is mainly set in DYFED. It mentions the usurper king Caswallawn in Caint (Kent). Pryderi visits him at Oxford. The Dyfed royals live at Arberth then go east to Henfford (Hereford), then returning to Arberth.
The Fourth Branch moves from the northern borders of DYFED (Ceredigion, Seisyllwch) to GWYNEDD.

A triadic package designed to prompt discussion in three different directions, to cross fertilise each other (interlace).

THE MABINOGI First I will quickly review the most major context points on the Mabinogi. the oldest prose stories of Britain.
See attached briefing for advance preparation. For those new/ish to the topic only a gist understanding of this will be necessary. It is provided with fuller information in compact form to keep on file longer term. Welsh language version is about to be added.
RHIANNON AS ‘TOUR GUIDE’  Secondly I will explain informally how a certain Rhiannon is acting as my personal ‘Tour Guide’ for my research project.
MY RESEARCH WEBSITE Thirdly I will become your tour guide around my research website, to look at why I find it so vitally useful as a research tool.

DISCUSSION will be welcome on any of the interlaced points of the triad: the Mabinogi opus itself; or Rhiannon as Tour Guide, as key to my personal research approach; or the use of a website as a research tool.

DOWNLOAD
Mabinogi_Briefing_by_Morgain_2015 is attached as advance preparation in pdf format.
It has two packed summary pages, some nice pictures, and useful resource lists for further interest on two levels: introductory or personal interest, and academic research.

Charles Sullivan has told me that Routledge Revivals List has agreed to reprint his key 1997 anthology. It is currently ONLY available from academic libraries, unless you’re lucky to have bought one years ago.

This is great news as this anthology collects together the array of work of the previous two decades, when Mabinogi perspectives changed radically from the past.
Charles said ” I published the book because I was tired of having to sort through pages of articles I had copied from various journals.”

Sullivan’s own particular field is modern interpretations on which he is insightful and incisive. Here is an accessible example of his thinking. http://www.celtic-cultural-studies.com/papers/04/sullivan-02.html

My conference diary 2015 until the summer, updated. Abstracts will be uploaded both here and on Academia.edu
I’m aiming to complete my general review of Mabinogi scholarship summer 2015 which will generate lots for the site. In the autumn I will move to more focus on my own theories. However these are already leaking into my presentations.

Thurs 19 FEB. 3pm. SWANSEA MEMO (Centre for Mediaeval and Early Modern Research) Director: Prof. Daniel Power. Reading group for mediaevalists.
A triadic prompt for discussion. 1) The Mabinogi. 2) Rhiannon as ‘Tour Guide’ to my research. 3) This website as a research tool, why and how. More info.

Fri – Mon 1-4 MAY LONDON Conference. ‘Medieval London and the World.’ Presenting ‘In Defence of the London Ravens’ Defense: deconstructing a deconstruction.'(Day/ time TBC)

Tues JULY 7 LEEDS IMC (International Medieval Congress at the University of Leeds) “The Use and Abuse of the Middle Ages in Modern Society.” Presenting Tues 7th panel 4.30-6.00 “The Once and Future Mabinogi”

EXHIBITION The first time all the original Mabinogi  manuscripts have been in one place.

Now on display at the Llyfrgell Genedlaethol Cymru – the National Library of Wales at Aberystwyth.
http://www.llgc.org.uk/visit/things-to-do/exhibitions0/4-books/

(Normally the Llyfr Coch is kept in Oxford but it has been lent for this exhibition. The Llyfr Gwyn is not in this special exhibition, but is close by in the same area.)

With thanks to Hilaire for circulating this information. 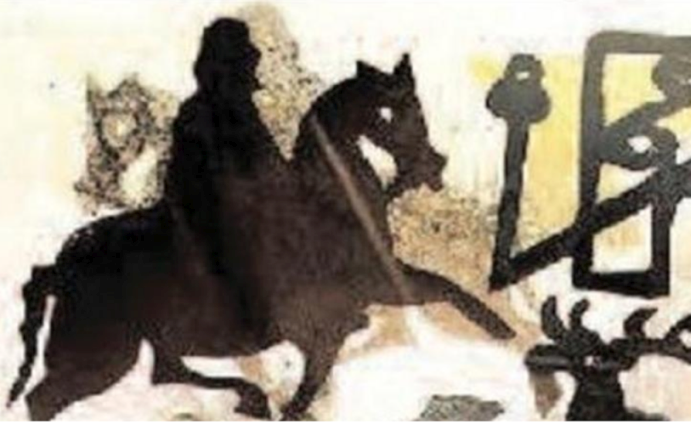 A workshop for storytellers with Sioned Davies, Translator of the Oxford World’s Classics edition of the Mabinogion, 2007. The workshop will be held through the medium of English and will include:

Participants are very welcome to bring along  with them examples of specific problems/challenges that they have found when re-telling the tales of the Mabinogion, and any questions they may have regarding the texts themselves.

For further details and to reserve a place please contact Heledd Brooks-Jones, School of Welsh, Cardiff University on 02920 870637 or Brooks-JonesHM@caerdydd.ac.uk

Sioned Davies ‘Perfoming the Mabinogi’ at Aberporth, 2010.
Retreat for storytellers under the auspices of Ty Newydd Writer’s Centre.