The Story of Pwyll’s journey to Annwfn, and his strange adventures there involving shapeshifting, an odd marriage triangle, and mortal combat at a ford. Pwyll becomes Pwyll Pen Annwfn, Head of Annwfn, a mighty alliance for Dyfed; but fate is cast, setting in motion the interlaced Stories of the Mabinogi.

The Mabinogi has Four Branches, that is, Pedair Cainc. The tales in these Branches closely interconnect. The First Branch has three tales and this is the first of these episodes. The telling here stays very close to the original.

The First Branch of the Mabinogi is set in Dyfed, the south west of Wales. This is one of the most beautiful lands on earth, with the ancient hills of the Preselis, beaches for fun, romance, science, and for legend. It is a soft green land with a famous, deeply quiet effect on visitors which soothes and rests the soul. Now called Pembrokeshire, ancient Dyfed is eternal, full of magic.

Pwyll, Prince of Dyfed, desired to go hunting.
He hunted in the valley of Glyn Cuch but became separated from his companions. He heard the sound of stranger hounds, then met them in a large clearing. They were pulling down a great stag. 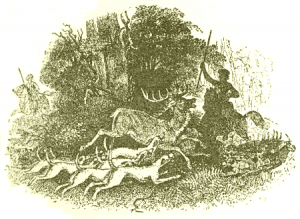 Pwyll, fatefully, beat off the strange hounds, even though he saw they glittered brilliantly, with scarlet ears. This showed they were the Hounds of Annwfn, of the Underworld.
Even so Pwyll beat them away, to let his own pack of hounds take the stag. The owner of the other hounds approached, in pale grey hunting gear on a huge horse. 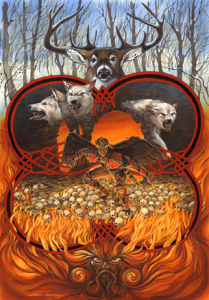 The other man spoke first saying he would not offer Pwyll any respect at all.
Pwyll played the innocent, and he might have got away with it, as his theft was on his own land as its prince. But after a long, fraught dialogue, the other man proclaimed he was a crowned king, Arawn of Annwfn.
Pwyll was clearly outranked, and in the wrong.
He apologised then, offering to do anything the king asked of him to make amends, to achieve friendship and peace.
Arawn required him to go to his land of Annwfn, live there, and vanquish Arawn’s enemy at the end of the year in a single combat by a ford..

Arawn undertook to shapeshift Pwyll to look like Arawn. Arawn would also look like Pwyll, and he would rule Dyfed in Pwyll’s absence. No one would know of the change.
In addition Arawn promised Pwyll would live luxuriously, in royal style, with the most beautiful woman at his side. He warned Pwyll when he faced the enemy king Hafgan at the end, to only strike him once. This was a magical single blow to kill him. Any more would mean he arose again the following day.

Pwyll duly arrived in Annwfn, finding it indeed luxurious and beautiful in all ways. The queen was indeed remarkable for her beauty and courtesy. Curiously when Pwyll went to share her bed, he turned his back on her, every night for a year. 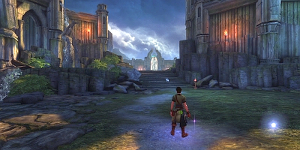 Pwyll arrives in Annwfn from the game ‘Mabinogi.’

At the end of the year Pwyll faced the enemy king, Hafgan. He obeyed Arawn’s advice using only a single blow. Hafgan begged for a second killing blow, but Pwyll refused it. Hafgan was carried away by his supporters.

Pwyll put the union of the two kingdoms in order, met Arawn back in the clearing in the forest where they first met, Arawn shapechanged him back again then Pwyll returned to Dyfed.
There he found all was well, in fact his counsellors assured him the land had never been better governed.
In Annwfn, Arawn was reunited with his Queen. After talking affectionately and making love, she was silent until he asked her what the matter was. The lady pointed out she had been neglected for a year so she was adapting to the change. Arawn confessed what he had done, and judged that in Pwyll he had found a fine friend. 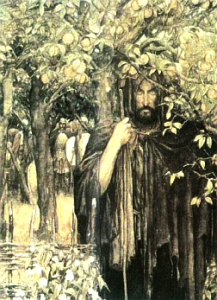 From that day forward Dyfed and Annwfn were the strongest of allies. They exchanged many rich gifts. In recognition of his great quest Pwyll was known from then on as Pwyll, Lord of Annwfn. 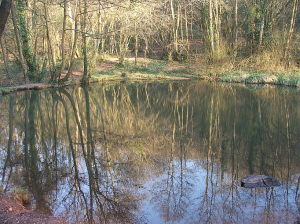 You can listen to this story free with an evocative musical background (Colin Jones, 2008)
www.valleystream.co.uk/products.htm
You can read an excellent and accurate translation online and free, by Will Parker, 2002.
http://www.mabinogi.net/pwyll.htm​