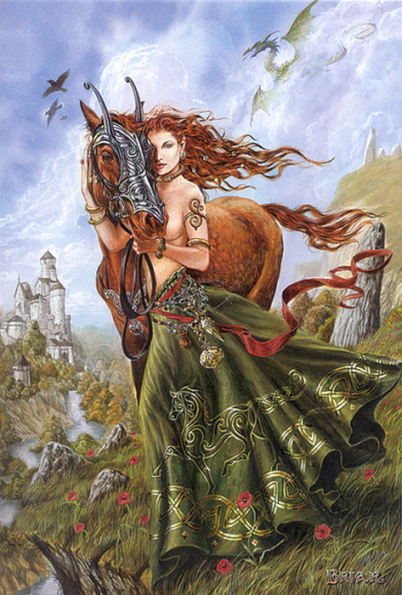 The Birds of Rhiannon appear in the Second Branch of the Mabinogi, episode 6. The son of Rhiannon, Pryderi, together with his great friend Manawydan, and five others, making only Seven Survivors in all, return from the ghastly Irish War. After the tragic death of queen Branwen, their lord’s sister, they follow his directives given before he died. He is Bendigeidfran, Bran the Blessed, a giant, and he commanded them to take his decapitated head with them on to London to bury it as a magical protection for Britain.

Just as Bendigeidfran tells them will happen, they become enchanted, staying in a magical stasis at Harlech. Here they rest and feast for seven years, and here the wondrous Adar Rhiannon come to them, which were three in number. As Pwyll had once realised all other women were unlovely compared to the peerless Rhiannon, so now her Birds sing so incredibly sweetly that all other music seems unlovely by comparison. Again, like their mistress whose paradoxical ride fascinated those who followed her, the Birds command the spatial dimension of nature. They can be far away across the sea, yet they seem close by and can be clearly seen.

We can speculate that Rhiannon, passionately devoted to her son, sent her Birds to lull him and soothe him in his recovery from war fatigue. For Manawydan his friend was so crushed by the terrible war he could not take up arms to reclaim his throne. His sister Branwen contemplated the awful massacres of the war, and died from her grief and guilt for it. It is very possible the Birds acted as Rhiannon’s faraway agents to protect and heal her beloved son. 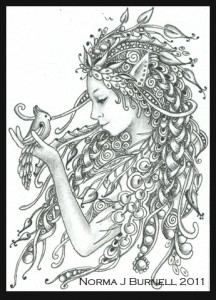 In another native tale from The Mabinogion Culhwch ac Olwen the giant Ysbadadden demands the Adar Rhiannon as bride gift from Culhwch, before Culhwch may marry the giant’s daughter, beautiful Olwen. A prophecy has foretold that Ysbadadden will die the night his daughter is wed. The giant wants the famous birds for their magical powers. It is not clear whether he desires their power to soothe the living so he can face his doom, or their capacity to wake the dead, so he can survive his fate: perhaps both. In the surviving story we do not hear all the details of what happens in the end, at least, there is no mention of the Birds being gifted. The conclusion of the tale does however end in the decapitation of the giant: this could connect with the decapitation of Bendigeidfran, who forecast the coming of the Adar Rhiannon.

In another contemporary tale ‘Lady of the Fountain,’ aka ‘Owein;’ birds of sweetest song arrive as part of the marvels of the Fountain, though a flock rather than three. They are not referred to explicitly as Adar Rhiannon but a number of parallels with Rhiannon make the connection clear to anyone who knows (or knew) the tales. Crucially their song is the sweetest, so much so it is beyond compare in any land. There appears a knight (a male rider) on a pure black horse, dressed in pure black brocaded silk. This is the precise opposite of Rhiannon who first arrives as a female rider on a great pale horse, in shining gold brocaded silk. The dark knight then shows a comparable paradoxical control of speed and pacing to hers. Finally this tale’s magic is triggered by a silver bowl. Rhiannon and Pryderi are at one time captured by a magical golden bowl. The way the parallels are left as suggestive rather than spelled out, is characteristic of this field of literature.