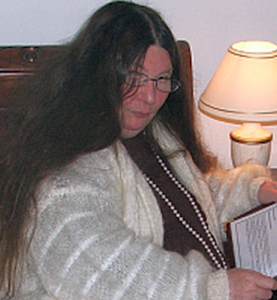 The most obvious thing is I love the Mabinogi.

After an English childhood fascinated by myths and legend, I re- encountered the Mabinogi  tales as part of Celtic mythology, as a girl in my 20s. The Welsh myths always drew me the strongest because of their maturity of view.  1976  BA Hons. Philosophy  2.1.  UCL (University College, University of London.) During the same period I was a member of the first Radical Feminist group UK.

Next came a major period of Goddess work 1983 – 2001 when I became a leading priestess within that movement (UK). I ran my own women’s retreat centre in London with a cafe, spa, and programme of festivals, courses and meetings. The Celtic and specifically Welsh myths continued to hold first place for me.  First books published via my House of the Goddess imprint.

1996 I went online and began building websites. 1999-2000  Cert. OET (Certificate Online Education & Training) Institute of Education, University of London. My attempts to introduce online methods in universities were ahead of the times, though I ran some good international seminars.  1999 -2003  Four years postgrad. research Feminist Theology/ Religion & Gender via the Independent Programme, University of London. Ended in health collapse.

I had found true love with a Welshman in 1989 who educated me a great deal on his native history, politics and mythology. My life moved constantly between London and Wales until the family settled in Wales for good in 2007. We live in a huge 16thC manor house which was a semi-ruin we renovated with hard labour and much help from friends. The family includes our adult son, and seven beloved Cats.

About 2010 I began independent academic research in Celtic Studies which gradually focused on the Mabinogi. During 2013  I compiled The Mabinogi Bibliography using Zotero and began mabinogistudy.com (this website). I found the supervisor from heaven in Dr. Christine James, University of Swansea, to support me towards a PhD. In 2014  I transferred most of this website to WordPress, including Tablepress and Zotpress.